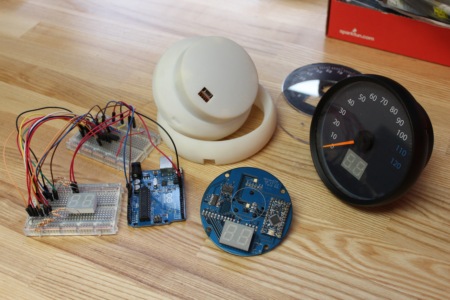 The Retro Gauge is a mechanical vehicle gauge that displays data received over a serial communication line. One possible use of the gauge is to display vehicle data from the OpenXC platform.

The design intent was to keep the gauge as open and accessible as possible so that the community could contribute and benefit from the design.

This project is contained in four different GitHub repositories:

Android - The retro-gauge-android repository contains an Android application to control the gauge with vehicle data from the OpenXC platform.

The Retro Gauge was created as an alternative to aftermarket gauges on the market. When we looked at what a lot of hobbyists and car enthusiasts were doing with their cars, we realized that aftermarket gauges were quite popular. However, these gauges were both expensive and required the installation of additional sensors, which was both timely and sometimes very technical. We decided to design a mechanical vehicle gauge that had the same form factor as existing gauges so that it would fit in existing gauge mounts. We also wanted to design a gauge that had the same feel and aesthetics as aftermarket gauges.

The design intent for the PCB was to allow developers to use common open source tools that are readily available to allow the gauge to be easily expanded. With this in mind, an Arduino Pro Mini was designed to easily fit into the board and a 6-pin header was added to allow the board to easily be flashed. A 2-digit 7 segment display was added to output the value of the desired signal as well as 2 RGB LEDs for aesthetics and visual signaling. The RGB value is digitally controlled using a Hue spectrum input (Hue Wiki). 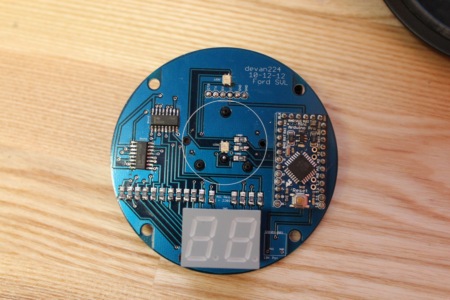 The hardware was designed so that it would fit into existing 3” aftermarket gauge mounts. In order to make installation as easy as possibly, only one port was added, a mini USB, to provide both power and data. It was also designed so that the gauge face could easily be swapped out to display different data types. 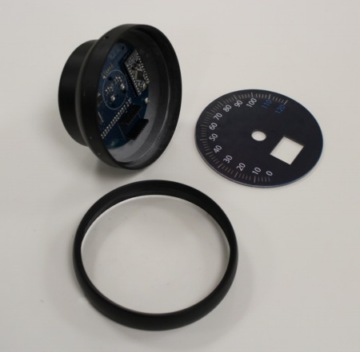 There are 3 main manufactures for small stepper motors that are most commonly used in automotive gauges - Switec, VID, and MCR.

For this project, the VID 29-07 was used since it was most readily available on eBay at the time of this project. Guy Carpenter’s Gaugette project has a great tutorial on how to use and control these stepper motors. Thanks Guy!